Maritime industry still has room for growth in San Diego

By JAMES PALEN, The Daily Transcript
Tuesday, May 7, 2013 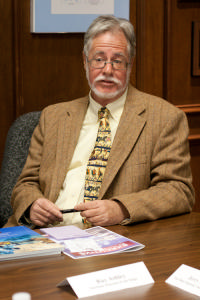 The maritime industry in San Diego is a system of businesses and sub-industries that is more complicated than it may appear to be, according to a group of a dozen executives gathered recently at a Daily Transcript roundtable sponsored by McKinney Advisory Group.

The multifaceted industry touches almost all other economic sectors in the region, from military to technology, fishing to cargo and a host of unrefined possibilities, the group said.

The Port of San Diego is doing well financially, said Randa Coniglio, the port’s executive vice president of operations. Its tenant businesses are experiencing increased revenue, and in turn, passing those gains onto the port with the implementation of profit-sharing policies.

“We attribute a lot of that to the diversity of our revenue base,” Coniglio said.

Coniglio said the port is looking at revenues increasing from its maritime and real estate operations -- almost back to the levels that they were in the best of times.

Bill Hall, chairman of the Port Tenants Association, said port policies have supported dramatic investment in the agency’s properties, even in a down market, and that more growth looks to be coming.

The past three or four years have provided healthy increases in business for Harborside Refrigerated Services, amounting to 8-10 percent each year, according to President Edward Plant.

Long-term leases offered by the port mean a lot of capital investment on Tenth Avenue Marine Terminal, Plant said, which will only add to the growth.

“We can see 20-30 percent increases in the next three to five years because of new facilities that will be put in at Tenth Avenue, and new capabilities that will expand the market,” Plant said.

Former San Diego Mayor Jerry Sanders, who now heads up the San Diego Regional Chamber of Commerce, noted that care must be taken in how the port allows businesses to expand around the terminal, because it doubles as the buffer for the shipbuilding industry and for the Navy.

“If we lose that buffer, then we’re going to start losing some of those other uses, and I think that’s never talked about in these discussions about grand plans,” Sanders said.

Hall said one of the best economic models that the port has today is actually at the National City Marine Terminal.

About two years ago, the Board of Port Commissioners approved a 30-year operating agreement for Pasha Automotive Services -- a longtime Port partner -- at that terminal, which is the primary port of entry for one of every eight cars imported to the United States. Pasha committed an investment for improvement of more than $10 million through the life of the agreement.

Calling the Tenth Avenue Marine Terminal an “enabler,” Hall said General Dynamics NASSCO could not exist without being able to bring in the project cargo and steel through the sea lanes into Tenth Avenue.

Capt. Winton Smith, commanding officer for Naval Base San Diego, also noted Tenth Avenue’s significance in national security, since it’s been identified as a strategic port because of its capability. If needed to address an issue overseas, a ship like the Bob Hope at Pier 5 could be brought to the terminal, outfitted with an entire Marine expeditionary brigade and sent out, Smith said.

But there was much discussed about what the port doesn’t have as well, and where it falls short of its capabilities.

Off-terminal infrastructure development is needed, Coniglio said. The Port of San Diego is pushing for federal assistance “to help move things in and out of the terminals efficiently and in a neighborly way.”

Mark Cafferty, president of the San Diego Regional Economic Development Corp, said the port has a better chance of seeing federal dollars for that purpose now that Scott Peters is in Congress.

Cafferty said the needed dialogue relates to the breadth of maritime jobs. He said that over the past year-and-a-half, the region has done its best job in defining that. That discussion is important in understanding why San Diego’s Port will never be like Long Beach, he said.

“And it shouldn’t because it’s sharing a footprint with the largest military installation in the world,” Cafferty said. “It has a tourism capacity down there, it has innovation capacity. The segments of the economy that we spend so much time talking about -- innovation, the military and tourism -- that drive economic growth, probably come together better on the water than anywhere else in San Diego.”

Plant agreed, but said there needs to be a look to the future, a view he thinks isn’t pictured enough by most.

“It is a big issue,” Plant said. “We could do a lot more business in the port – commercial-wise.”

According to a March report from the American Association of Port Authorities, the Port of San Diego ranked 123rd in the country and seventh in California in cargo volume. The Port of Long Beach ranked fourth nationwide and topped all California ports. Los Angeles had the state’s second-highest cargo volume.

Looking back at a 2003 Daily Transcript column by John Patrick Ford, he said the future of maritime services in the Port of San Diego looked “very promising,” recalling a site tour of the National City Marine Terminal as it was prime for expansion and talking up capital improvements undertaken at the Tenth Avenue Marine Terminal.

But Ford’s column also noted something that brings meaning to Plant’s comments: According to Ford’s nearly-10-year-old column, the Port of San Diego at the time handled about twice as much tonnage as Port Hueneme -- which is now listed one spot higher than San Diego in both national and state rankings.

“I think one of the things that we forget is that we’re not just San Diego,” Plant said. “We’re also Tijuana, with 2,000 containers a week that go across that border that have to come from L.A. I don’t know why they don’t come through the Port of San Diego.”

That’s an illustration of the infrastructure limitations faced by the Port of San Diego in its current state, Cafferty said.

Another emerging issue comes in dealing with the region’s growing blue technology economy, with high-tech companies like Hydranautics, a water desalination membrane innovator, and underwater robotics company SeaBotix, making a foothold in the San Diego area.

According to its President Michael Jones, the Maritime Alliance is about to start a series of visits to around 30 identified maritime technology companies around the region, with economic development organizations and elected officials in tow. The idea, he said, is to try to make people aware of the breadth of that sector in the industry.

Jones has recently been pushing the idea for marine spatial planning -- a concept he said is gaining a lot of steam around the world. The state hasn’t really hasn’t taken a lead role in it, so Jones is talking to the EDC and county Board of Supervisors about creating a holistic approach, and taking it to the state.

Jones broadly classified two types of industrialization around the port: the highly visible -- like the Navy, shipbuilding and refrigerator warehouses -- and another “invisible” industry, with technology players like Hubbs-Sea World Research Institute and SeaBotix.

“They’re selling 80, 98, 99 percent outside of this region, and there are 100-plus companies like that,” Jones said, while gesturing to roundtable participant Rick Timm, the president of SeaBotix.

“Or it’s something like Don Kent [president and CEO of Hubbs-Sea World Research Institute], who can create potentially a whole new industry for aquaculture and add tens of thousands of jobs in San Diego County.”

Looking across the maritime technology industry, Jones said, companies like those are growing at a rate of 20 or 40 percent per year.

He placed the water technology industry in the same category, saying the desalination industry alone is supposed to grow to $30 billion in size worldwide by 2016.

“And San Diego is the mecca of water technologies,” Jones said.

In San Diego, everything is bright in Timm’s undersea robotics future, and all maritime technology in the area, he said -- except one thing: the backing of a university program.

Cafferty said that same thing can be said to be deficient for many technologies beginning to thrive in San Diego.

“This is where the planning discussion gets even more critical,” Cafferty said. “As Don just described in bringing (fishing) jobs back to San Diego … and then you go into what SeaBotix and so many companies like SeaBotix are going to be capable of doing in the future. You start to turn to our universities and say, ‘How are we producing the right workers for what we need?’”

The challenge going forward with marine spatial planning, he added, is planning for the individual growing up in San Diego, to offer opportunities to those who already call the city home.