An attempt to clarify the One Paseo traffic study left some still in the dark about what LOS D, E and F mean, and how the project will actually affect local roadways.

“I don’t know if I understand it after the last three hours,” said Frisco White, chairman of the Carmel Valley Planning Board. “I think I got a better understanding as to what’s going on with traffic.”

The Carmel Valley Community Planning Board sought on March 29 to gather easily understood information from the traffic report. More than 300 people filled the room for the informational meeting, where 25 prepared questions were answered by city traffic engineers Farah Mahzari and Labib Qasem.

One Paseo is a 23-acre, 1.4 million square-foot mixed-use project at the southwest corner of Del Mar Heights Road and El Camino Real. The buildings will range from one to eight stories above Main Street. Trader Joe’s, Pinstripes, a theater and four restaurants have signed contracts.

Groans and laughter from the audience showed dissatisfaction with the city engineering staff's presentation. 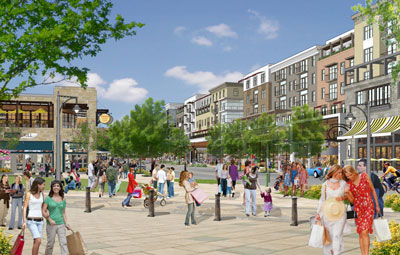 Board member Nancy Novak voiced her concerns with redirecting traffic to side streets, and several board members were concerned about bottlenecks.

Mahzari said she cannot design or tell an applicant to do one thing or another; her job is to look at the project within the criteria and mitigate the impacts.

“We think we’ve done that,” she said. The staff does not have a recommendation.

Qasem and Mahzari were asked to provide explanations in layman’s terms, but were often caught using engineering jargon such as LOS E and LOS F, which confused board members and likely the audience. At least one audience member was confused as to whom the speakers were representing -- the city or the applicant.

What the two did explain was that the proposed mitigations to the project will not help every area. Mitigations include widening roads, adding HOV lanes, adding traffic signals and increasing the length of turning “pockets.”

“Carmel Valley’s roads were expected to be well-landscaped with landscape medians and rather serene to drive," said Anne Harvey, board member. "And the mitigations you’re telling us about change the character of those streets and the entire community.

"So the circulation system won’t function as intended. It wasn’t intended to function like Mira Mesa Boulevard,” she said, followed by applause from the audience.

Mahzari said the streets aren’t being reclassified and the project includes a “huge” landscape plan with internal landscaping and open space.

“Yes, we’re adding left-turn pockets or lengthening right-turn pockets or adding a signal to mitigate the impacts. In total, I don’t think we’re changing drastically the character of the community,” Mahzari said.

In response to Novak’s concern about traffic being shunted through the community, Mahzari said “unless the signals are not working, there’s no reason to shortcut through a residential street.” She suggested monitoring the area during Phase 3, but White said it would have to be done before that, as “residents to the north of the property are most impacted.”

“[Novak] was emphasizing that this is now giving opportunity for people to take a shortcut through her neighborhood to avoid the traffic on Del Mar Heights Road," White said. "I think that’s the intent of her question and that’s the concern of a lot of neighbors in that area.

“The traffic improvements are giving opportunities for those people who do not want to queue on Del Mar Heights to take the routes through the residential. So what you’re saying is that is not the case, which we may or may not believe. … So we’re going to agree to disagree on that.”

The project involves more than traffic, White said, such as land use, visual impacts and shopping -- issues that will be discussed in the future.

Bernie Turgeon, community planner, said the staff is evaluating public responses to comments on the draft environmental impact report. The applicant has provided responses to the first 100 comment letters, which covers most of the issues, he said.

The responses will be reviewed over the next couple weeks and will be provided to the consultant to incorporate into the EIR. The EIR will be completed in the next couple months and there is a minimum of 14 days before the first public hearing.

White said the next meeting will be scheduled as soon as the EIR is released.

A while ago, I was on the south side of Del Mar Heights Road, walking east, approaching Mango Drive. I stopped on the southeast corner of Mango and Del Mar Heights Road, waiting for the traffic light to change. Across the 5, I could see an emergency vehicle, its roof-top lights flashing, attempting to make its way west on Del Mar Heights Road. It was going nowhere fast. And not because other cars and their drivers were failing to pull over as required, there was nowhere for them to pull over: All the lanes were full! And now we're being told that "mitigation" will miraculously eliminate this situation? Just like they do in LA? Where the developers of Paseo One know something about painting a development pretty? Before the damage is done?