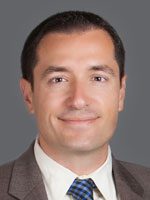 Immigration attorney Jacob Sapochnick has a lot of empathy for his clients. He was, after all, in their position not too many years ago.

Born in Israel and raised in Haifa, he came to the United States in 1998 to study for his master's degree in international comparative law at California Western School of Law in San Diego. He became a U.S. citizen 10 years later.

"I had to go through the whole immigration process," he said. "It was my first experience with that kind of law. At the first law firm I worked at as an intern, I got more experience with it. What I like about immigration law is that touches many areas of law, such as business, corporate, trial work, family — it pretty much has everything in it."

Since starting his practice in 2004, Sapochnick has navigated clients through constant changes in the law, and is watching the immigration bill winding its way through the U.S. Senate. The package would present many challenges for his downtown San Diego firm as well his clients around the country.

"The biggest challenge right now is there's a lot of confusion," he said. "A lot of people provide misinformation to the community. Those immigrants who are going to benefit from this really have no idea what is going to happen. The changes are complex because they focus on several areas, such as legalization of undocumented people, changes to the family-based immigration system, the status of temporary workers, immigration enforcement.

"What is important to understand is that we haven't had so many changes in almost 30 years, changes that are going to be huge. It's going to change the way we practice immigration. I think it's exciting."

To help provide answers and information, Sapochnick has forged an aggressive presence across social media. His firm has one of the largest and most active Facebook law communities in America, with more than 84,200 "likes." His company website contains videos, news articles, a blog and other content aimed at keeping clients, potential clients and other attorneys updated on immigration matters. He is frequently sought after by the news media on the topic of immigration law. He has been featured on NBC, KPBS Evening and Midday Editions, ESPN, Fox, Reuters and many others.

"We use social media extensively in our practice to market the firm and build relationships with other attorneys, to help them get success online," he said. "We have clients in all 50 states, which is very interesting because now with the Internet, we're able to reach people that we never thought were possible."

It's so nice to hear from your topics about immigration, now we know what else we can do before we proceed to the application process. Thanks for all your concern. Everyone benefited for this matters. More power to you and your staff...