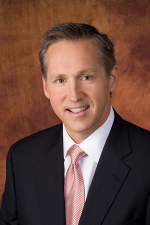 No less than the President of the United States is interested in what Jeff Walker Martin is doing at Sempra U.S. Gas & Power.

Martin is the CEO of Sempra U.S. Gas & Power, a developer of clean-power solutions with a focus on zero- and low-emission fuels. The company operates solar, wind and natural gas-fueled plants that produce enough electricity for more than 1 million homes. The firm also owns natural gas storage, pipelines, and distribution utilities that serve residential and business customers.

Martin is a West Point graduate who served as a captain in the U.S. Army. No stranger to tough leadership decisions, Martin refocused the company’s business strategy and set it on a different course soon after he took the top job at the organization. First, he divested from company plants that burned fossil fuels. Then he redeployed the proceeds from those sales into new solar and wind generation investments backed by long-term customer agreements.

Today, Sempra U.S. Gas & Power is a national leader in the clean-tech sector. Martin gives credit for the organization’s success to his executive team. He says that while he is the leader and sets the agenda for the company, his team of executives makes most of the decisions. Martin adds that Sempra U.S. Gas & Power is an entrepreneurial-minded company that can nimbly react to shifting policy demands and take advantage of new opportunities in the industry.

Martin believes that the American utility system will undergo more changes over the next decade than has occurred in the past 100 years. He says that this is because of advances in technology, policies mandating low-emission fuels and consumer demand for clean energy.