Based on a recent proposed and controversial airport overlay for Lindbergh Field by the San Diego Regional Airport Authority, much of Harbor Island and the Embarcadero could not have been developed as is today.

Many of the overlays, which cover all 16 San Diego County airports, have been controversial because there are often many more restrictions proposed on the land uses surrounding the airports than exist today. 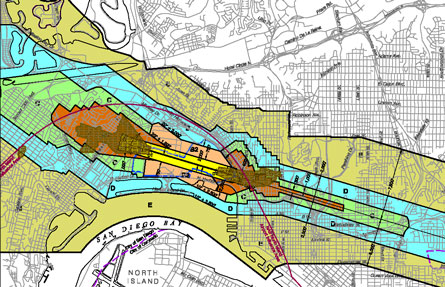 John Helmer, manager of planning services for the Port of San Diego, said the Lindbergh Field overlay would have a dramatic impact on the development of the port's tidelands.

He said the overlay would effectively ban structures of more than 70 feet tall in the Harbor Island and Embarcadero. That could impact such projects as the proposed Cruise Ship Terminal and the planned 500-room hotel on Lane Field.

While it has been made clear that nothing would be torn down under the plan, the overlay does raise the possibility at least that a property might not be allowed to be redeveloped because it exceeds the height limit in the zone.

Angela Shafer-Payne, the authority's vice president of strategic planning, said it would be up to the Federal Aviation Administration to determine whether or not the redeveloped project would present a problem and each development would be considered on a case-by-case basis.

Architect Kirk O'Brian, who wants to develop housing in Point Loma, contends the Lindbergh Field overlay would only allow him to build warehouses.

"Is that what we want on Voltaire?" O'Brian said.

Shafer-Payne said this is a case where the existing zoning would hold sway. She said as long as an area was already zoned residential, it could remain in that use. The same might not be true for a rezone, however.

Longtime restaurateur and community activist Tom Fat of Fat City said the overlay could be devastating to Little Italy because of height limits and noise restrictions.

"This goes to the whole issue of conforming and non-conforming uses," added Helmer, "But this is all wrong. Every once in a while, the planning process is so badly done that even the baseline data is not correct."

Helmer has also taken issue with the process saying that the port wasn't really brought into the discussions.

During the course of the Lindbergh Field meeting, Sunil Harman, an authority staffer, said the overlays have been the topic of extensive study and conversations with many stakeholders involved.

"This is a document that balances a series of competing interests and we've had to work with various city councils," said Harman. "We've received 133 separate responses."

Meanwhile, the San Diego County Regional Airport Land Use Commission voted unanimously Monday to postpone the implementation of overlay zoning plans for eight airports in the county from McClellan-Palomar in Carlsbad to Brown Field in Otay Mesa.

Under state law, the authority was supposed to have overlay plans in place by June 30. Authority officials have conceded they don't know what the penalties might be for missing the date. Regardless of the consequences, the commission voted to extend the time for eight airports for at least the next 90 days.

Are the overlays a ploy by the airport authority to build a case for moving the airport? Send a letter to the editor.

The Daily Transcript. Business news and data worth paying for. Online, on your doorstep. In your mailbox, in your inbox. Get the news you need on your terms, from 1.92 a week. Subscribe now.