By TANYA KURLAND, Special to the Daily Transcript
Friday, May 4, 2007

Hoping to be known as the firm that represents the "underdog," the partners of Chapin Wheeler LLP are ready to take on large corporate entities. But the partners have an advantage -- both have worked on the other side and know in advance what strategies the hotshot lawyers may take.

"I love going against the big shots. I love it!" attorney Ed Chapin said. "If you choose the right case and do the job, you can make a difference in someone's life."

The firm represents both businesses and individuals as plaintiffs going against large entities in complex and high-stakes matters. Chapin Wheeler LLP bills itself as a firm that can handle the job just as well as larger firms -- without the higher fees and rigid hourly billing rates. 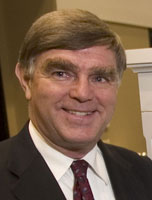 Jay Wheeler and Chapin formed the partnership in 2005 after serving on the bar since the early 1970s. The office recently moved from its downtown Broadway location to 550 W. C St., Suite 2000.

"We were sort of busting at the seam," Wheeler said.

The new office will allow the firm to grow, adding on to its current staff of four full-time lawyers, three contract lawyers, a paralegal and several administrative support. 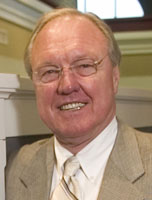 Although they never worked together, Wheeler and Chapin have known each other for years, meeting at numerous law functions and social gatherings. They both also live in Point Loma just a few blocks from each other, and their wives are close friends.

Both have extensive background in trial law working for prestigious law firms. But with that comes little control and freedom as a lawyer on a case, Wheeler said. Interested in venturing out on his own, Wheeler sat down with Chapin to discuss his vision, and both shared a desire to represent the "little man" against big, powerful entities.

"I just basically decide to do something different the last couple of chapters of my career. This (idea) seemed more challenging, exciting and rewarding," Wheeler said.

Other bonds that drew them together include their Midwest background and shared experience as U.S. Army veterans. Originally from Minnesota, Wheeler attended the U.S. Military Academy at West Point and graduated in 1969.

"I grew up in a small farming community and it was a good opportunity for me to see the world," he recalled.

He then spent six years in the U.S. Army stationed in Vietnam as a military adviser to the South Vietnam army. When his service ended, he decided to hone his analytical expertise from the military and apply it to law. He received his degree from the University of Virginia School of Law in 1978, and soon headed west to California.

Chapin grew up in Southern Missouri and received his Bachelors of Science in History from Southwest Missouri State in the 1960s. He entered the U.S. Army Infantry and served in Germany and later combatively in Vietnam from 1964 to 1968. Chapin attended and graduated from the University of Missouri Columbia Law School in 1972.

A military veteran, there was no question Chapin would take on his most recent case representing the wife of a decorated combat soldier. The husband was diagnosed with cancer and did not receive the proper care and treatment as promised by his military representative, Chapin stated. The veteran died in a facility in Tijuana, Mexico.

"There is a sort of a brotherhood between soldiers ...You develop a bond and that bond caused me to rally behind this solder and aid him by helping his widow," he said.

Chapin previously worked for the San Diego city attorney's office for 14 months, and then was hired by the firm now known as Wingert Grebing Brubaker & Ryan LLP. He made partner at the firm and represented clients in personal injury civil trials until 1997. Chapin also served as lead counsel for the chemical manufacturer featured in the movie "Erin Brockovich."

After a few years on his own, he joined the Gordon & Rees firm in 2003, where he was a principal trial lawyer. He had no desire to run another firm until his chance meeting with Wheeler.

"He has great integrity ... He is someone who is well rounded, not easily rattled, an excellent lawyer," Chapin said. "Qualities you like to have with someone you team up with."

Wheeler, meanwhile, worked for the same firm for 25 years. At Latham & Watkins, Wheeler served as a senior partner, one of the firm's principal trial lawyers and chairman of its San Diego Litigation Department from 1996 to 2000.

Spending more time in a board room, Wheeler yearned for the excitement and challenge of the courtroom.

"It's a very ... important component of the profession," he said. "It's a great dimension of society to vindicate your rights in a neutral court of law ... That skill needs to be preserved."

Currently he represents LandGrant Development, known as the Mercado Alliance, in a suit against the City of San Diego Redevelopment Agency. His client was hired to develop the residential/retail center Mercado in Barrio Logan but was dropped by the city last year after deciding to hire another developer.

"Our client wants to continue to develop (the area) and will fight to do so," Wheeler said.

No matter what the case or issue may be, though, the firm "always has the best interest of our clients," Wheeler said.

"Most cases will settle, but we treat every case as though it will go to trial. So that if it does go to trial ... we are prepared," he stated.

"Sometimes a good settlement can be achieved if you are not afraid to go to trial."