One of county's two main energy transmission lines cut off

The California Independent System Operator Corp., also known as California ISO, has declared an energy transmission emergency for Southern California due to the fires that are currently ravaging the region.

California ISO said Tuesday the most dramatic impact from the fires is currently in San Diego, where multiple lines in the 500,000-, 230,000- and 138,000-volt rating are no longer in service. So far, 24 different lines in the county have been affected by the fire, according to California ISO spokesman Greg Fishman. Some of the affected lines have been repaired, Fishman said.

"The transmission grid that we operate in San Diego has suffered losses and it has the opportunity to impact our ability to deliver power to the region," said Fishman. California ISO is "getting the word out that the situation is getting pretty serious and it gives us the authority to act quickly to take steps that we would need to take to keep the grid up if we lose more lines." 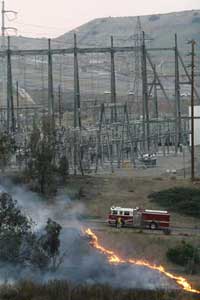 San Diego Gas & Electric spokesman Art Larson and California ISO's Fishman said one of the region's two main energy transmission corridors has been severed. The Southwest Power Link, a 500,000-volt line that conveys power from Arizona to San Diego, has not been in operation since Sunday due to damage caused by the Harris fire, one of the county's two major fires currently burning near Otay Mesa and Eastern Chula Vista. It was unclear when the line would be mended.

Larson said SDG&E has asked for assistance for repairs and damage assessments from crews and utilities throughout the southwest region.

Monday night a fire burned around the Miguel Mountain substation, which the Southwest Power Link runs into, knocking out several of the 230,000-volt lines that run out of the station, according to California ISO's Fishman.

The other main transmission line for the San Diego region that flows from San Onofre in the north, remains functional. However, SDG&E's Larson said the power line is also being threatened from the other major fire burning in North County near Rancho Santa Fe and Poway.

Larson declined to comment on the possible affects to the San Diego-region should the northern conveyance line be cut off.

Electrical power outages are affecting 24,992 customers in 44 communities as of late Tuesday, acording to SDG&E. The utility reported that the power grid is operating near maximum capacity and is urging customers to conserve energy if at all possible.

So far there have been no blackouts or outages related to transmission issues, according to Fishman, but he stressed that conditions are changing rapidly.