Bug! Realty does business on the move

When Kevin Seney worked in the mortgage industry, he said he couldn't help but think how stale real estate brands were, and how inefficient they had become.

After 15 years of working in the mortgage sector, Seney decided to shift career paths and put his stamp on the real estate industry.

And so in 2004, he founded Coronado-based Bug! Realty USA Inc. -- a new, memorable and approachable real estate business brand that embraces technology, using virtual offices and eliminating the use of a physical office.

The company is characterized by its agents spending their workday driving Volkswagen Beetles, an icon for the branding of the company, and holding their meetings in casual restaurants or coffee shops and also being able to work from home. 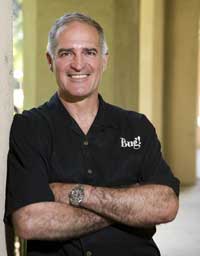 "Real estate companies were not very efficient and all the brands had grown stale," Seney said. "This would be a great way to take a more efficient approach to the market, working more efficiently without an office. It makes the commission structure more flexible and you're not chained to a high overhead."

Seney, who earned his MBA in finance from San Diego State University, had previously worked in the mortgage banking industry during which he worked as CEO for The Home Loan Store Inc. before selling the business in 2000.

He said he saw an opportunity to revolutionize the real estate industry, just as Geek Squad revolutionized the computer service industry by branding its service.

"All of a sudden, Geek Squad branded computer service and they revolutionized it," Seney said. "In reality, Geek Squad are just computer-service people, but customers view it as fun and friendly. It's a huge success story and we're really trying to follow in their footsteps."

Bug! Realty USA Inc., has been under development for the past three years and has sold a number of franchises so far, in cities such as Santa Cruz, San Francisco, Danville, San Diego and Grand Junction, Colo.

Seney's Bug! is authorized to sell these franchises and also provides training, branding, marketing and big-picture support to individual franchisees. It manages the entire franchise network for Bug! Realty.

The broker who buys the franchisee is the broker for the office and employs individual agents as per their requirements.

Patti Barrett, who bought two franchises in Colorado, has previously worked for brands such as Century 21 and has been in the real estate business for more than 20 years.

"I was searching for a new franchise and I read about everything out there. I liked his (Seney's) philosophy and that it saves you money and that it's more efficient," Barrett said. "Everywhere I go, people remember my car, give me a thumbs-up and ask for a card. People really like the Volkswagen as a marketing tool and it's working out well so far."

Seney's management model has revolutionized the way real estate agents work. They no longer have to go to an office and work in smaller groups, usually meeting at open houses, barbecues or even their children's soccer games.

"The whole concept is we work in smaller groups, with agents working in teams of two to five people," Seney said. "We've turned into a lifestyle and because it's so visible, it takes your business and personal life and joins them together."

Bug!'s advertising is another unique aspect of its management philosophy.

"Brands are something that have an emotional quality and because we're driving Beetles ... it's become an unforgettable brand name," Seney said. "The billboard marketing system that is built around the car is free and it's working incredibly well."

Another advantage of using the Volkswagen Beetle is that it represents an attitude of being economical and does not guzzle as much oil as a Lexus or a BMW.

This keeps with the company's fresh management philosophy in the real estate marketplace, according to Seney.

"It's almost a joke in the industry that all Realtors drive a Lexus or BMW. We wanted to go another way and not be part of the status quo," he said. "We want to be perceived as being efficient and economical. There's a whole trend of being green and we want to be consistent with it."

In today's market, where gas has been an ever-changing and rising cost, the virtual offices of Bug! have been affected by the on-the-road nature of the business.

Seney said he never expected gas to rise so much when he started this business and it has affected the company. He added, though, that since Bug! does not have to pay an overhead and uses economical cars, it has fared better than other Realtors in the current market.

In fact, since a number of Realtors have been cutting employment or are going out of business, Bug! has been getting a number of inquiries in recent months, Seney said.

"In a strong, positive, up-swinging market, agents don't move," he said. "But in today's market with lots of Realtors closing down, agents are looking for a new place to go and something that will work in the marketplace. The kind of impact we make in the market is something agents are attracted to."

Seney said the reason for these commissions was that it is a buyer's market and a 3 percent commission allows them to attract the buyers.

Bug! closed its stock offer on Dec. 27 last year and is continuing to grow this year, Seney said.

"It's just winding the clock back and making things simple again," Seney said. "This company represents the simplicity of being able to live in a casual atmosphere and work at the same time. It's a very unique concept and so far, we've been successful."