U.S. Navy Capt. James Rice said farewell Thursday to the command that he says is the pinnacle of his career.

Rice was relieved of his duty as commanding officer of the medical treatment facility in USNS Mercy (T-AH 19) by Capt. Jeffrey Paulson during a change of command ceremony Thursday morning onboard the San Diego-based hospital ship.

"Of all my tours in the Navy, being CO of Mercy is the pinnacle of my career," Rice said.

After taking command June 22, 2007, Rice was tasked with planning for Pacific Partnership 2008, a 148-day humanitarian mission that brought health care services to more than 90,000 patients in the Republic of the Philippines, Vietnam, Timor-Leste, Papau New Guinea and the Federated States of Micronesia.

Rice said the mission was not about pulling in and telling host nations how to practice medicine.

It was instead about working together with medical professionals from those nations to help provide services, and share expertise and experience to influence long-lasting improvements in the nation’s health care standards. 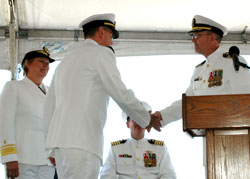 Working side-by-side gave Rice and his crew an opportunity to build relationships with residents of the host nation. They could lend an ear or a shoulder to cry on.

"Sometimes, the tears were our own," he said, reflecting on what he saw and did during Pacific Partnership 2008. "I say that, because we were changed in some ways forever."

Hospital ships play an integral role in the Navy’s humanitarian and international outreach efforts. They can be deployed anywhere in the world and provide top-notch care to people in need.

"This isn’t so much about the Navy as it is citizens helping citizens," Rice said.

But he was quick to give the credit to his entire Mercy team, saying he could not have done it without all of them.

"I know Captain Paulson has some pretty big shoes to fill," Reilly said. "I think he’s going to do just fine."

Paulson now will begin preparing for Pacific Partnership 2010, for which the Mercy is slated to deploy in May.

After taking command, Paulson took a few moments to set the stage for his tour. He laid out some basic principles and goals for Pacific Partnership 2010.

"I ask that we all work together in an atmosphere of mutual respect," he said.

But Paulson isn’t the only one with big shoes to fill.

Rice will report for duty next month to become Fore Surgeon for the Military Sealift Command.

"I know I have big shoes to fill in D.C.," Rice said. "I’m going to learn a lot. It’s going to be a tremendous opportunity."

Send your comments to erin.bridges@sddt.com