Two months after winning EvoNexus' DemoDay pitch event, the co-founders of Hush -- a smart earplug that combines noise blocking and white noise-generating solutions to improve sleep while connecting with your phone to hear alarms or emergency notifications -- are launching a $100,000 Kickstarter campaign to get the product into production.

Daniel Lee, one of the three founders, said the round runs through Dec. 18, with the proceeds covering the fixed costs of manufacturing, such as molds, as well as other standard business costs — and survival for the team.

Since earning the title of DemoDay champion, Lee said Hush has been working with local engineering consulting firm Expertise Engineering to finalize some of the more technical hardware and electrical engineering components to prepare for manufacturing.

Though the team hasn’t selected a company yet, Lee said Hush intends to have the manufacturing for this stage done in San Diego.

The quantity of production is small enough -- 10,000 units would far exceed their goals -- that outsourcing didn't make sense.

The company is working with several recommended firms, but has yet to get quotes and decide on a manufacturer. 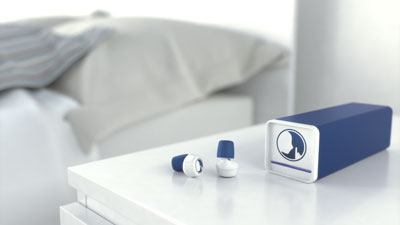 The earbuds, which Lee described as "the world’s first smart earplug," block out noise, but not indiscriminately so. They will retail for $149. Those supporting the Kickstarter fund at a certain level can get them for $115, and 1,000 early adopters can buy them for $99.

Lee said the team, which has seven months left at EvoNexus, chose Kickstarter over other options -- the top contender in their minds was Indiegogo -- based on numbers.

"We actually really strongly considered Indiegogo because I had an inside contact there who introduced me to people," he said. "But we did Kickstarter because we saw it as the platform with the largest user base, which meant one less step for a person to have to make an account," a high barrier to overcome at similar sites.

Earbuds are expected to ship in May 2015. The campaign can be found here: www.kickstarter.com/projects/hush/hush-the-worlds-first-smart-earplug .