It would take hundreds of programmers with Ph.D.s in computational neuroscience thousands of hours to create a robot capable of completing one simple task on its own — say, picking up toys off the floor — given the complexity of coding.

That process would have to be repeated for each task you’d want a robot to do, if the promise of robots replacing humans in the dull, dirty and dangerous jobs we don’t want to do is to be fulfilled.

The idea of sinking massive sums of money and time into one task doesn’t sit well with renowned neuroscientist Eugene Izhikevich, formerly of The Neurosciences Institute, who proposed a different — and seemingly far-out — solution.

“We realized the problem is not that it's difficult or impossible to build the body of the robot,” Izhikevich said. “The problem is that it’s extremely expensive and challenging programming the robot what to do in its natural environment.”

“What we tried to do was say, 'OK, it’s the programming that is so difficult. What if we kind of replaced programmatic training? What if robots are more like animals — they have a brain; they can see. Can they be taught what to do so that they’ll have more intelligence to deal with more complex tasks than just vacuuming the floor?'"

All signs point to yes.

Izhikevich and his 60-person team at Brain Corp. — a startup fully funded through series A and B by Qualcomm Inc. (Nasdaq: QCOM) but seeking additional funds —have deployed three products, including eyeRover, a small, two-eyed robot capable of learning and being trained to complete tasks autonomously using BrainOS, the company’s operating system and key to what they say will transform the future. 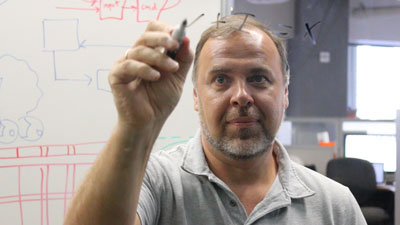 “We built a brain operating system that allows people with no expertise in robotics, people who maybe have entrepreneurial skills or design skills or marketing skills, to be able to outsource to someone to build the body of the robot, then put our brain inside the robot,” Izhikevich said.

“Then [they would] use a remote control to drive the robot around and show examples of what they want. Our brain operating system is going to learn from the human operator what his strategy is, what his intentions are in any particular case, and it will eventually extract all this knowledge and start to control the robot autonomously.”

This means anyone with an idea for a robot would be able to design and build the body and simply put Brain Corp.’s system inside, train the robot for what it needs to do, and voila.

The impact of this concept — if successful — isn’t lost on Izhikevich.

“We want to be what Microsoft was for the early era of PCs, basically the enabler of that whole revolution. We want to be the same enabler for consumer robots,” Izhikevich said.

“When our mission is accomplished, I think the impact of what we’re doing on society will be greater, if not equal, to the impact of the Internet.”

It’s hard to predict when that mission will be realized, but Izhikevich, who developed the first simulation of a neural model the size of an actual human brain in 2005, said if all goes according to plan and partner companies on the hardware side of things work at the same speed as Brain Corp., these small consumer robots will be on shelves within three years. 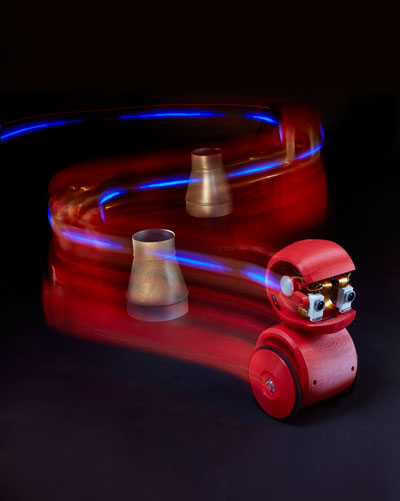 At first they would be used for menial, mainly household tasks such as vacuuming, collecting toys and folding laundry, but eventually could have uses in agriculture — picking berries, for instance — or even uses in health care.

They would fulfill the promise that robot enthusiasts have talked about for years: completing the dull, dirty and dangerous jobs humans don’t want to do.

Robots running on BrainOS would, however, still need a human in the loop, at least initially. Using a remote control, robot trainers — as Izhikevich calls them — use a system of supervised learning to be the brain for the robot, showing it what you want it to do. The system learns its task, and is quickly able to perform the function autonomously, although the trainer is able to make corrections or changes.

Any robotics aficionado or Qualcomm diehard might be thinking this idea sounds familiar. Qualcomm’s Zeroth Processor, which was created with Brain Corp., aims to fill a similar void in the market.

“To date we have discussed the aspects of the program focused on neuromorphic computing — biologically plausible neural networks in silicon for very low-power computation.

“Our vision is to enable 'smarter' robots and smartphones by allowing them to excel at perceptual pattern-matching tasks that can be executed fully on device.”

Izhikevich said Zeroth and BrainOS aren’t competitors, and can be used in tandem.

“Here you have smartphones, Android apps and users. For our case. it would be robots with all the hardware, Zeroth processors for computational hardware, BrainOS, then behaviors and then users," he said.

"It’s a partnership. They are suppliers of processers for us, and we create software that makes those processors useful in real applications.”

Brain Corp.’s office was within Qualcomm’s campus until the company recently moved to a larger space in Carmel Valley. Izhikevich said that although the company is housed at Qualcomm, fully funded by Qualcomm and involved in the creation of Zeroth, it doesn’t actually have any relationship with the mobile giant except as a portfolio company.

With room to grow, Brain Corp. hopes to have 100 employees within the year, though finding people with the right mix of computational neuroscience, computer vision and hacking skills means employees hail from all over the world.

One perk of working for Brain Corp. is the location. Izhikevich said San Diego is increasingly becoming more of a robotics hub due to a confluence of three unique factors: UC San Diego, the birthplace of computational neuroscience and machine learning, which attracts top talent and allowed for “more computational neuroscientists within five square miles than anywhere else on this planet,” as Izhikevich puts it; Qualcomm, which is committed to apply its technology into other areas including robotics; and finally Tijuana, which allows for greater quality and IP control in manufacturing.

In addition, San Diego is now home to UCSD Chancellor Pradeep Khosla, the man responsible in large part for turning Pittsburgh into one of the other major robotics hubs in the United States.

“San Diego didn’t miss on the telecommunications evolution, it didn’t miss on biotech but it did miss on dot-com, and it missed on social networks,” Izhikevich said.

“The next one will be in consumer robotics: applications of [artificial intelligence], machine learning, computational neuroscience and computer vision to consumer products. It’s going to happen. And we are pushing very hard. Wouldn’t it be great if it happened in San Diego, where San Diego is the leader and everybody else is the follower?”