By SYDNIE MOORE, Special to The Daily Transcript
Friday, December 30, 2011 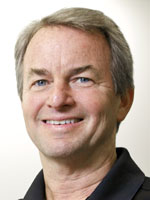 Ever-enterprising Fred Luddy, founder and chief product officer of ServiceNow and winner of the Ernst & Young Entrepreneur of the Year 2011 Award in the technology category, plunged into the software business at an early age.

At 18 years old, he developed a software program which automated supply chain and maintenance purchasing processes for a business unit of American Standard.

“I was working in the factory machine shop,” Luddy said. “I walked into a computer room and knew from that moment I never wanted to leave. I begged for a job there and I got it. I was very lucky.”

He’s been successfully programming and creating software ever since.

In fact, last spring he stepped aside from his CEO position at ServiceNow -- the pioneering creator of software-as-a-service (SaaS) for IT management -- so he could devote his time to product development and strategy. Software industry executive Frank Slootman took the helm as CEO in April.

Since he founded ServiceNow in 2004, Luddy has seen the advent of Web-based computing – also known as “software service in a cloud” -- fuel the white-hot growth of his company.

“About seven years ago, I decided to do something about the existing state of enterprise IT software,” Luddy said. “I knew there had to be a better way.” He soon realized ServiceNow had “a very real opportunity to become one of the largest, most successful software companies in the world.”

With ServiceNow’s explosive growth in 2011, Luddy is well poised to attain this goal. His company recently passed $125 million in annual recurring revenue, with industry analysts recognizing it as the fastest-growing market-share leading cloud service for IT management.

Additionally, the company ranked No. 5 on the 2011 Technology Fast 50 -- Deloitte's listing of the 500 fastest growing technology, media, telecommunications, life sciences and clean technology companies -- and was lauded as the fastest growing software company with revenues greater than $50 million by The Inc. 500’s 2011 ranking of the fastest-growing privately held companies in the United States.

A single system of record for IT processes which brings together IT strategy, design, transition and operation on one simple platform, ServiceNow’s software helps big companies and other organizations manage IT operations. Unlike most other platforms, ServiceNow started from the ground up to be SaaS.

“We are the brains behind IT operations -- the system that helps IT run their system,” Luddy explained. “For large corporations coordinating work in hundreds of countries, we offer a completely different way of managing IT: one platform, one piece of integrated software accessible via the Internet.”

Luddy and his team have developed a powerfully simple cloud platform that works, as evidenced by a growing clientele of some of the largest and most innovative enterprise IT organizations in the world, among them the European Organization for Nuclear Research (CERN), Skype, UBS (NYSE: UBS) and Welcome Trust.

In addition to what Luddy said is “a little luck,” he attributes his company’s phenomenal success to “a combination of market dynamics, obsessive customer focus, innovative technology and a lot of hard work.

"I'm extremely proud to say it all started in San Diego and continues to benefit the community with great jobs and a renewed vitality."