After three years of design and engineering work at its unmanned aerial systems hub in Rancho Bernardo, Northrop Grumman will unveil its Alliance Ground Surveillance system developed for NATO on Thursday at its Palmdale facility.

The NATO surveillance system is essentially a Block 40 Global Hawk with added maritime radar capabilities and a few other minor changes. It is meant to serve the 28 NATO nations in defense and border surveillance, humanitarian aid, disaster relief surveying, and search and rescue operations.

The surveillance system was created in 2012 when 15 NATO nations worked out a cost-sharing strategy — the breakdown has not been released — and awarded a $1.7 billion contract to Northrop Grumman (NYSE: NOC) for five AGS unmanned aerial vehicles. 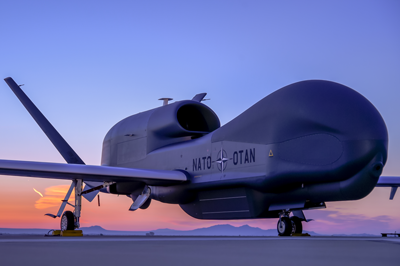 Four of the five UAVs are in final production in Palmdale, with the first flight expected this year, delivery of the aircraft to their NATO home base in Sigonella, Italy, in 2016, and full operational use in 2017.

“Part of that transformation is this is a new benchmark for how nations will operate in the future and how NATO and other treaty members can acquire capabilities that individual members by themselves could never afford,” Zeiser said.

“The 15 participating nations are essentially spending money or paying for the acquisition of the system for the benefit of the whole alliance and their national governments.”

Though nations contributed different amounts and in different ways, the five AGS aircraft will be NATO-owned and operated. That means nations wanting to use the AGS for certain missions will have to get approval from the NATO supreme allied commander.

Examples of mission requests might be tracking forces or spotting threats for troops in Afghanistan or Ukraine, searching for missing planes, helping relief workers after natural disasters or surveying for counter-piracy missions in the Mediterranean.

Zeiser said one of NATO’s key goals was to reduce costs by modifying an existing product rather than develop one from scratch, which is why the AGS is based so closely on the Global Hawk. The aircraft itself is only one piece of the system, though, with ground stations for data and communication developed by European members.

The AGS will work with alliance nations’ existing systems so that joint Intelligence, Surveillance and Reconnaissance (ISR) capabilities are accessible. Zeiser said all 28 NATO members will supply staff — often military personnel — in Sigonella to control the AGS aircraft from the ground.

He also said that, like the Global Hawk itself, the AGS is a surveillance-only system with no weapons-bearing capacity.

The Global Hawk and its AGS cousin are high-altitude, long-endurance unmanned aircraft capable of functioning at an altitude of 60,000 feet for up to 32 hours. The Global Hawk has a 130-foot wingspan, is 47 feet in length and weighs more than 32,000 pounds at takeoff.

Zeiser said it’s possible that the NATO AGS program will lead to acquiring other systems or similar shared-cost programs for member organizations like NATO, or for individual nations.

“I believe that the AGS system for NATO will spawn additional national requirements. The five jets for NATO can’t possibly perform for everyone,” Zeiser said.