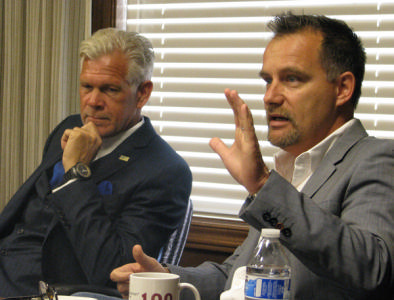 The business world is shifting from efficiency to innovation. Older, larger firms and government are lagging behind startups and companies built around creativity, but the solution to bridging the gap between the two isn’t complicated, a panel of experts said.

“And I truly believe if we could put forward some of the hard, knotty problems that the government is really challenged with in an unclassified environment — I get that aspect of it — and allow that ecosystem to chew on it, I think some really amazing things could happen,” she said.

It all comes down to communication.

Brian Suh, the director of the Technology Transfer Office at the Navy’s Space and Naval Warfare Systems Center Pacific, said there is infrastructure in place to facilitate collaboration between startups and government organizations such as the Cooperative Research and Development Agreement.

But Michael O’Brien, CEO of Mingle, countered that the startups with potential to solve these problems often aren’t aware they exist.

“I’m intensely involved in the startup community in San Diego, specifically downtown, and we never see anyone saying, ‘Yeah I’m going to go solve this government problem,’ primarily because we don’t know those government problems exist,” O’Brien said. “And more importantly, we don’t know there’s a marketplace for acquisition or whatever, so it seems like a communication breakdown.”

In the private sector, this is being solved in what Steve Soules, executive vice president at Booz Allen, calls a revolutionary change: focusing on opportunity, as opposed to false boundaries, without preset contracts.

“There have always been formal partnerships and prime and sub relationships and all this, but organizing around innovation is something new, moving us into this audacious era we’re talking about,” Soules said.

“Being bold and brave and putting money on the table to help someone else was unheard of — you always competed, so it’s really an interesting dynamic shift I’m seeing, particularly in the Western region,” he said.

“Organizing external to your company without formal partnerships, sharing best ideas with startups, going to what we call ‘combustion chambers,’ or garages and shark tanks — where you’re almost throwing it out on the table to give your idea away, but you trust your environment — that’s new. In the old days you’d have to form a final contract. ... But to start with the idea, I think is revolutionary, like 1776,” Soule said.

While a firm or organization’s relationship with outside partners is key, James Hammerschmidt, director at CareFusion, said creating an internal culture that fosters creativity and doesn’t have a fear of failure is equally as important.

“Innovation internally, in my opinion, is almost impossible without the right culture,” he said.

Innovation is people, not a research and development department, Hammerschmidt said.

But attracting those people can be difficult, especially for the government, which can’t pay the private sector’s high salaries and has to fight a negative connotation about its work and mission.

Shawn Parr, CEO of Bulldog Drummond, said connecting work to a specific mission goes a long way toward recruiting top talent and maintaining employee engagement, as in the socially responsible movement of a decade ago.

“There’s been a revolution in the social consciousness, and I think government and military could learn actually quite a bit from looking at the transition that happened in that space,” Parr said. “It was mission-based work, it was environmental work but it captured the imagination of millennials in a very different way.”

“And cyber and data — they’re subjects that don’t necessarily engender a level of passion, but the problems that those issues are connected with solving do. So I think what happened in the social space, or in the NGO space, was they started to frame their problems differently; they started to tell their stories differently,” Parr said.

Suh said the Navy and SSC Pacific don’t have that problem of connecting daily work to a bigger mission. They ensure their employees are given the opportunity to see how the technologies they developed are deployed through their Scientist at Sea program, which allows lab researchers to embark on ships and interact with sailors.

And sailors aren’t immune from the desire for a more innovative, creative and flexible workplace.

Dave Grundies, CEO of GET Engineering Corp. and a retired Navy aviator, said the work and retirement structure of generations past isn’t what young adults entering the service now are looking for — and the military is taking note.

“Our generation that thought the defined-benefit plan of work — give your youth to the military and at 20 years or 30 you can go home with a pension right then — the millennials don’t like that, so they’re shifting that,” Grundies said.

“They want to have something that’s a little bit more mobile than this defined-benefit plan,” he said. “And so that gives rise to … the premise of ‘let’s take some military guys and put them at Google or vice versa.’

“The culture’s not quite ready for that, but there’s so many of them and they’re so passionate about what they do that even the military has realized that we’ve got to change the way we train, the way we reward and certainly this pension thing,” Grundies said.

While the corporate and government worlds attempt to restructure and keep up with changing dynamics, the key ingredient to a successful venture will be to innovate, regardless of channels.

“And what I marvel at is one area of innovation, and I think it’s the next frontier. … Innovation and the competitive edge for America are purely going to be based on people.”