If you weren’t paying close attention in October, you may have missed a fairly significant shift in the local biotech space. What had been known as Janssen Labs since its opening in 2012 changed its name — and mostly just that — to JLABS to better identify the purpose of the incubator space and create more cohesion under the Johnson & Johnson Innovation umbrella.

Kara Bortone, head of company sourcing for JLABS, said this incubator component was originally called Janssen Labs because of its connection to the pharmaceutical space (Janssen is J&J’s pharmaceutical division), but now with companies spanning neuroscience, medical devices, e-health and, yes, therapeutics and pharmaceuticals, the name didn’t seem to fit as well.

“Originally that’s how we were set up, as an innovative lab. We thought that’s great to have the name carry through, Janssen Labs,” Bortone said. “But it was a little bit confusing because at JLABS we’re actually representing companies — and have companies housed in our incubator — from medical devices to consumer goods to pharmaceuticals. So we really felt the J&J name actually fits better to that, and is really in line with having a one-stop shop for companies interested in partnering with J&J. They can go to the J&J Innovation Center and they can have all these different tools at their disposal. One of those tools obviously is the incubator space at JLABS.” 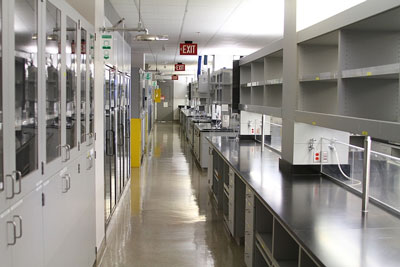 JLABS offers startups lab benches for rent, in addition to all of the incubator's shared work space, conference, rooms and equipment. Photo courtesy of JLABS.

The October date for the change was chosen in part to align with the announcement that a fifth JLABS site will open in the first quarter of 2016 in Houston. San Diego is the flagship location, followed by two collaborations with other firms in Cambridge, Mass. and Mission Bay in Northern California, and a standalone South San Francisco site run like the facility on the Mesa here.

Aside from the name change, there also was a shift in leadership. Under the Janssen name, the incubator reported to Diego Miralles, the head of Janssen Healthcare Innovation who helped start the incubator. Now the group reports to the larger J&J Innovation Center and Ken Drazan, head of J&J Innovation, California.

Bortone, who started three months after the program kicked off, has seen it grow from four companies at the one San Diego site, to 90 startups in incubation across all labs. At last count, roughly half of all those companies are housed at JLABS in San Diego.

There’s no shortage of incubator and accelerator programs in San Diego, but Bortone said what JLABS offers is unique for several reasons. First, J&J doesn’t take equity. Selected applicants pay $1,100 per month per bench to use the space, and that’s as far as their commitment extends. Of course it’s nice when partnerships develop between J&J and the startups, as they have in about 30 cases across all the sites, which is a higher success rate than from the general pool of related companies.

“Really our goal is to become a partner of choice for the companies here and just start the discussion and see if it results in something down the road, but by no means requiring companies to partner with us,” Bortone said.

The second advantage is the autonomy companies have, but coupled with the resources of a large firm that startups often forget about — waste removal, Environmental Health and Safety, and Occupational Heatlh and Safety infrastructure is already in place. JLABS also offers specialized, sealed rooms for work with cell cultures, viruses and bacteria.

That facility component is what Jeff Stein, president and CEO of Cidara Therapeutics (Nasdaq: CDTX) — a biotech firm developing anti-infectives that went public in April — said was key for Cidara in its early days.

"It provided Cidara, as a startup at that time, with a convenient and reliable facility option," Stein said.

While a good portion of the firms that apply and are accepted into the J&J incubator are from San Diego, Bortone said she was surprised how many come from around the country and even the world, which she credits in part to San Diego’s strength as a biotech hub, and world-renowned stem cell work in particular.

“I think when we first started the project we expected them to come more locally,” Bortone said. “But surprisingly we do have several companies that come from around the world, so we have companies from Canada, Mexico, Germany … It’s quite an international group.”

Applications are accepted year-round, and are reviewed based on four criteria: unmet medical or market need, novelty of the approach, track record of the team and financials. Bortone said J&J is typically looking for a startup to have three to six months of finances to live on, but is also looking at financials to ensure the product is viable in the market, since J&J bases its decision on non-confidential information. 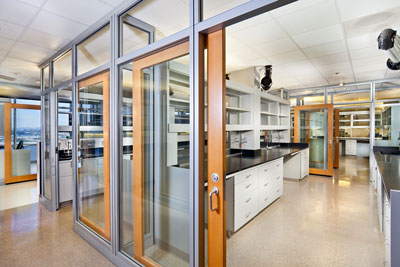 Companies in JLABS have access to however many 5- to 6-foot long benches they choose to rent, 70 pieces of large shared lab equipment, and 20,000 square feet of coworking or open space in the 40,000-square-foot JLABS facility, which is part of the 300,000-square-foot larger J&J facility. There are 450 employees doing internal research for J&J in the Janssen section, and 200 people working at JLABS.

Bortone said JLABS has pretty steady interest and sees companies move through the program regularly. It is always interested in hearing from potential program fits, though benches don’t stay open for long.

“We’re pretty much at — the scientific word is 'homeostasis,'” she said. “So we do have a few openings still, but I would say we’re at a good point where the companies here can still grow and we can still accept applicants, but we are seeing a good cycling through of companies.”