Innovating the basics: A new kind of notebook

While today's spiral notebooks and three-ring binders are much the same as they were 40 years ago, Levenger, a Florida-based company, has created a much improved design, called Circa. It fits right into our high-technology environment, providing a solution that lets us intermingle handwritten notes, which a vast majority of us still use, with computer-generated output.

The concept is quite simple. Circa consists of two components: paper pages with mushroom-shaped holes, punched 1-inch apart along one edge, and molded plastic discs that hold the pages together. 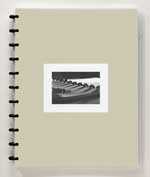 Levenger's Circa notebook has paper pages with mushroom-shaped holes and molded plastic discs that hold the pages together.

Stack together the pages and snap on the disks to make a Circa notebook of any thickness. Translucent plastic and leather covers are available or you can make your own. While the disk system has been around since the early 1900s, Levenger expanded it into a broad, flexible system that now has more than 400 items.

The pages can be opened to lay flat much like a spiral notebook. But what makes the Circa unique is that a gentle pull will easily remove the pages allowing you to reinsert them elsewhere in the notebook.

The pages come in a wide variety of sizes including 1-inch by 3-inch pocketsize note cards, 3-inch by 5-inch index cards, and 5 1/2-inch by 8-inch sheets. Since they all use the same hole and ring pattern, you can add the smaller pages to the larger notebooks. Many users carry the note cards and add them to a larger book back at the office.

Circa's pages can be opened to lay flat much like a spiral notebook.

Levenger also sells a paper punch that allows you to create your own pages. You can create a personal calendar and notebook using calendar printouts from Outlook or Entourage. Circa provides a degree of flexibility similar to a word processor that lets us move pages around as needed. You'll likely find it as versatile as I have and also find your own uses. (levenger.com.)

AT&T and Verizon were both in the news recently for announcing new policies that seem to go beyond the pale, perhaps even violating basic constitutional rights.

AT&T revised its policy allowing it to terminate service to anyone who dares to criticize the company. It now reads in part:

"[AT&T] may immediately terminate or suspend all or a portion of your Service, any Member ID, electronic mail address, IP address, Universal Resource Locator or domain name used by you, without notice, for conduct that AT&T believes tends to damage the name or reputation of AT&T, or its parents, affiliates and subsidiaries."

Which brings up two questions:

1. Is it now possible to get out of a long-term contract without paying a termination fee by criticizing AT&T?

2. Does this column constitute a criticism that will cause it to cancel my three accounts?

Verizon's transgression is even more worrisome. It refused to permit NARAL, a pro-choice organization, to send text messages its members, who had all given permission to receive the messages. Verizon said the decision relates to all organizations, regardless of political leanings. The company went on to say it accepts no messages from any group "that seeks to promote an agenda or distribute content that, in its discretion, may be seen as controversial or unsavory to any of our users."

Since when does a communication company that licenses our spectrum have the right to determine what we send on its network? That's like telling us that we can't discuss certain subjects when using its phone lines.

Fortunately, Verizon relented after protests from customers and Congress. But its initial action indicates it wants to have a say on what moves across its networks. That's why we need to support net neutrality, a law that prevents carriers from doing just that.

Baker has developed and marketed consumer and computer products for Polaroid, Apple, Seiko and others. He is the holder of 30 patents and was named San Diego's Ernst & Young Entrepreneur of the Year in 2001. Phil can also be heard on KOGO AM the first Sunday of each month. Send comments to phil.baker@sddt.com. Comments may be published as Letters to the Editor. Phil's Blog is blog@philipgbaker.com

Apple recently introduced its new generation of iPods. While much of the focus has been on Apple's new iPod Touch, which replicates the iPhone interface, expect the most popular model this holiday season to be the iPod nano.

The new nano is Apple's most affordable and smallest model to play music, TV shows, videos and display color photos. It's about 3/4 the size of a credit card and as thick as a stack of 5 of them. Its 2-inch screen has the same 320 x 240 resolution as the larger video iPod, making it surprisingly viewable and the perfect pocket photo album.

There's an enhanced user interface and longer battery life with more than 20 hours for music and 5 hours for video. Its entirely metal construction and polished, stainless steel back and anodized aluminum face are available in silver, black, blue, green and red. It costs $149 for 4GB capacity (available in silver only) and $199 for 8GB.