It may not be long before highly filtered reclaimed wastewater makes its way into the city of San Diego's drinking water supply.

From in front of an advanced water purification facility built specifically for the purpose of testing the possibility, city leaders said Thursday that they're ready to kick off the yearlong experiment called the Indirect Potable Re-use pilot project.

But San Diegans shouldn't expect to see the treated wastewater in their homes just yet.

That's why the project is labeled "indirect." None of the water treated at the facility, built on the grounds of the North City Water Reclamation Plant, will be directed to the drinking supply through the pilot period. Instead it will be pumped back into the city's regular supply of recycled water, used heavily for landscaping.

"San Diego has elected to move beyond its fear and let science do its talking," said Mayor Jerry Sanders.

The facility will send water through a three-step process of ultrafiltration, reverse osmosis and ultraviolet light and and advanced oxidation treatment. Tests for drinking viability will be conducted daily on the water coming out of the treatment plant, Sanders said.

Representatives from the city's Public Utilities Department and San Diego Councilman David Alvarez spoke similarly of the importance of the pilot program.

"A dependence on imported water leaves San Diegans, like I said, at the mercy of ever-increasing water costs from other agencies," Alvarez said. 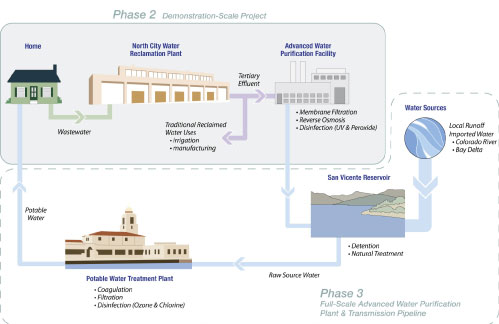 But the facility, city leaders added, will help solve another issue.

Every year, the city has to get a waiver from the Environmental Protection Agency to pump treated wastewater from the Point Loma Wastewater Treatment Plant back into the ocean. In treatment industry terms there are three general levels of treatment facilities: primary, secondary and tertiary, each yielding higher quality water, respectively.

The Point Loma plant is considered an advanced primary treatment plant, placing it on the cusp of acceptable standards for the ocean pumping.

The water that normally gets pumped back into the ocean meets health and safety standards as shown through strict monitoring, said Roger Bailey, the city's director of public utilities. But the latest waiver received last year was contingent upon the condition that the city does something to better the quality of its reclaimed water.

The Indirect Potable Re-use pilot project, which Bailey described as beyond tertiary standards, was crafted to meet that condition.

To satisfy the EPA, San Diego only needs a secondary level treatment facility. But considering the cost of any new facility -- the pilot project has an overall budget of $11.8 million -- the city opted to build a plant beyond tertiary standards, confident that taxpayer costs could be offset by water ratepayer savings. If the pilot is successful in showing that pure drinking water can be achieved from wastewater, the city may not need to rely as much on importing its water from outside sources like the Colorado River, a process that has led to numerous rate increases over the years as water agencies bicker over costs.

The facility will accomplish two things, Bailey said. First, it will take the load off of the Point Loma plant, so that only a certain percentage of wastewater will be directed there and then back into the ocean. The new facility will be able to handle up to 100 gallons per day that would otherwise go to the 240-gallon-per-day Point Loma facility and back in the ocean.

"The second thing is," Bailey said, "since we're going to incur a cost to do that -- to mitigate the Point Loma problem -- why don't we do something that is going to kill two birds with one stone."

If all tests of the water come back clean and safe for drinking through the pilot, the city plans on then taking the treated water and directing it into local reservoirs.

Sanders said there is no plan for a vote to approve that, citing the pilot itself as the determining factor.

"It's supposed to test whether this is safe. And once we determine it's safe -- you know, you don't vote on things like that," Sanders said. "I suppose people could referendum, whatever decision it is, because it will have to go in front of council, and that's a different issue.

"My concern for the entire time, is I'm the one who has to make the decision of whether it's safe. And after a year of testing from the California Department of Health, I think we'll have a very good answer on that so I can be assured one way or another."

The facility will go active next week.