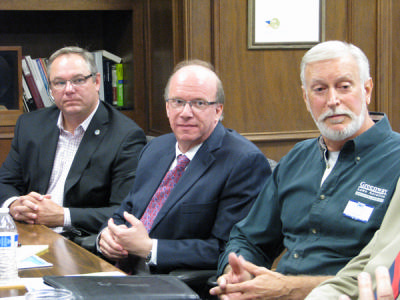 As new state regulations on water use take effect this month, communities and businesses realize that wise water use is expected of every Californian.

Water conservation was on the minds of a group of executives from business, government and private organizations that met at a recent roundtable at The Daily Transcript, which was sponsored by law firm Buchanan Ingersoll & Rooney.

Discussions centered on how to meet regulations that benefit the state and don’t hurt business, and how to translate the messages to a State Water Resources Control Board that's in unchartered regulatory territory.

But the group wasn't without its ideas.

A managing shareholder of Buchanan Ingersoll & Rooney said water conservation plans can go only so far before the public has little left to conserve or feels little incentive to try.

Buchanan Ingersoll & Rooney represents one of the developers of the Carlsbad Desalination Project, IDE Americas, whose parent company also developed many desalination plants in its home country of Israel.

"It's an unpopular kind of viewpoint, but I think where the rubber hits the road is [when] people conserve — they cut their water use down to nothing — and their bills don't go down," Keith Solar said. "When that happens, people say, 'Why should I do this?'"

He noted that in Israel, up until about a decade ago, conservation measures such as ones employed here were normal during dry years. Israel receives about the same amount of annual rainfall as San Diego.

"It didn't work for them," Solar said. "So 10 years ago, they decided to build [desalination] plants. They built four or five of them — they're the largest in the world. And now Israel is water independent, and we are not. That tells you something."

Californians should be focusing more on finding alternative water supplies, he said.

"The portfolio of water in San Diego County is really diverse — more diverse than any other region in the state of California," Larson said. "We're suffering along with the rest of the state — I'm not going to say needlessly, because the governor feels this need to have a statewide message."

But the net effect of the state-mandated cutbacks and a new supply — such as water from the Carlsbad Desalination Project coming online and directly feeding the distribution system — is that San Diego is going to put water from its other, less expensive sources into storage, Larson said, while much of the rest of the state will struggle just to have enough water to meet demand.

In an ideal scenario, he said, Gov. Jerry Brown — on the day he stood in a relatively snowless portion of the Sierra Nevada in March to announce his executive order for cutbacks — would have pointed to San Diego and said, "If you had all done what San Diego did, we'd be OK."

"But that's not what happened," Larson said. "We've got a huge disincentive now to be independent."

The San Diego County Water Authority has expressed discontent with State Water Board mandates not providing its member agencies credits — against the water use data used to calculate each water district's conservation standard — for new, independent water sources such as desalination. However, active and former officials said not all the effects of the mandates will be bad for the Water Authority.

Tom Wornham, who recently was chairman of the Water Authority's board of directors but is now CEO of San Diego Private Bank, said that because of the required water cutbacks and the resulting excess in supply being diverted to San Vicente Reservoir, the Water Authority can more quickly achieve its goal of filling the reservoir to its new capacity after the recent raising of San Vicente Dam.

That project, another of the Water Authority's efforts to increase San Diego's water independence, had initially been scheduled for a complete filling of the reservoir through rainfall over the next few years.

"We thought it would take us three years to fill that," Wornham said, adding that projections said it could take as long as five years.

"It won't, because now we'll be buying raw water from [the Metropolitan Water District of Southern California] — we're changing the mix of our purchase — and we'll probably be able to fill San Vicente in a year. It's not an ideal situation, but it's one where we can [play it by ear] for a year, year and a half, without making this thing make less business sense than it already does."

And in mid-May, as the Water Authority Board adopted two-day-per-week countywide limits on outdoor landscape watering in response to the new state regulations, the Water Authority's water resource manager, Dana Friehauf, said that all that stored water could become available in the coming years should the drought continue.

Other plans to diversify the region's water supply include water reuse projects in the city of San Diego and Santee. Even though the Water Authority and local water districts say they're being pinched by regulation, Wornham said making large investments in increasing local water independence shouldn't be seen as mistakes.

"All the business dynamics that went into bringing desal online still make sense," he said. "There are some urban myths that are already starting around this desal stuff because it's timed with [us not being able to] use the water right now."

The city of San Diego's Pure Water program plans $3.5 billion in new infrastructure to turn wastewater into purified, potable water. Subject to further review by the San Diego City Council for incorporating its projects into future city budgets, it would bring three wastewater treatment sites to the city over the next 20 years.

The sites would treat water diverted from the Point Loma Wastewater Treatment Facility instead of allowing the less-treated water to be pumped 4½ miles out into the ocean, as it is now.

The Environmental Protection Agency has been granting the city waivers for years to allow for the offshore discharge of the Point Loma facility's "advanced primary" treated water, and has been pushing for the city to upgrade the plant.

Brent Eidson, deputy director of external affairs in the city's Public Utilities Department, said the Pure Water approach would replace a $1.8 billion upgrade of the Point Loma facility with a plan that would produce drinking water as well as permanently change how the EPA classifies the plant.

Under the plan, the city would request a permanent classification, the equivalent of the "secondary" treatment facility the EPA desires, instead of annual waivers.

Joe Panetta, president of Biocom, said that's important because in the biotechnology industry, accessibility and reliability of water supply is as important as cost.

Every time the fermentation process begins, a biotech company is investing hundreds of thousands of dollars, Panetta said. Unexpected water cut-offs, such as what were feared two decades ago during another major drought, could cost companies a lot of money.

Eidson said no such plans are being discussed in the city, either formally or informally.

But as the city looks to invest in creating potable water from wastewater, Larson said the region could benefit from expanded use of "purple pipe" water, which is treated enough for agriculture and some industrial uses, but not for drinking.

Escondido, he said, is already planning to send its recycled water east to farmland.

"That's the same as creating a new supply of water," Larson said.

Panetta and the biotech industry are not alone in having concerns about the State Water Board’s direction.

A report released in May by the National University System Institute for Policy Research concluded that on average, the water restrictions are unlikely to have a regionwide economic impact.

But Craig Kessler, director of governmental affairs for the Southern California Golf Association, said pockets of industries could be hurt simply by where they're located. He said the golf industry is an example.

Golf courses use a lot of water, but Kessler said the industry has invested heavily in water-saving changes that could mean a fatal blow to courses in urban areas hit with some of the steepest restrictions.

"If there's a common theme to the public policy that's come out … it's that going forward, we're going to reward profligacy and we're going to punish thrift," Kessler said.

Some courses that have already carefully planned out water efficiencies — some cutting water use by 40 percent in the past decade — could be pushed toward insolvency if they're in neighborhoods hit with the highest conservation targets: an additional 36 percent.

Hoping to dispel what he says is a popular myth, Matt Adams, vice president of the Building Industry Association of San Diego, said the BIA meets weekly with senior Water Authority staff to express concern over public opinion that more building during a drought means wasting water.

"Our challenge is that I have an explanation issue," Adams said.

He said he has to address industry conservation efforts, landscaping techniques and water-use figures that he said don't get attention.

"New homes today use 46,000 gallons [of water] less annually, compared to a home that was built in 1990," Adams said. "You’ve got 600,000 homes in San Diego County alone that were built prior to the 1980s when we started to do the Title 24 and the water conservation components, retrofitting."

If all older houses in California were retrofitted to modern standards, they would save 300 billion gallons, he said.

"There are avenues to make this work that will not require any cessation in the housing creation," Adams said. "Housing's not getting any cheaper, and it's getting more expensive because we're not building enough today as it is."

Solar put the potential for retrofits into the context of other public projects under consideration, such as a new stadium for the San Diego Chargers.

Noting that he wants the team to stay, he offered a vision of the progress that could be made in closing the retrofit deficit if the public money planned for a stadium was instead made available to homeowners.

An average water-efficiency retrofit would cost a homeowner about $1,500, Adams said.

Solar also suggested possibly adding requirements for those selling their homes to update landscaping irrigation to the latest, most efficient technology and sprinklers.

"They've all said, 'Good idea, but I don't know how to implement it,'" Lawn said. "To me, if you can implement the sale of a home and you have to change over to low-flow toilets, why in God's creation can't we mandate a water audit and upgrade to irrigation-responsible technology?"